All About Gingerbread, Plus Recipes

The original word for gingerbread came from a Sanskrit word, singabera, meaning “root-shaped like a horn.” Ginger has been grown in India and southern China for countless centuries. The ancient Chinese used it as a medicine.

Gingerbread is an ancient treat. Egyptians were eating gingerbread when the great pyramid of Cheops was still young — but the first recipe came from Greece, where, in about 2400BC, a baker from the island of Rhodes created it. The unleavened, honey-sweetened cakes became famous.

Over the course of gingerbread’s history, its form varied from location to location. In some places, gingerbread was a soft cake, while in others, it was a crisp, flat cookie; still in other places, the treat came as warm, thick squares of “bread” sometimes served with a pitcher of lemon sauce or cream. Gingerbread was sometimes spicy. Almost always was cut into shapes — men, women, stars. or animals — and colorfully decorated or dusted with sugar. 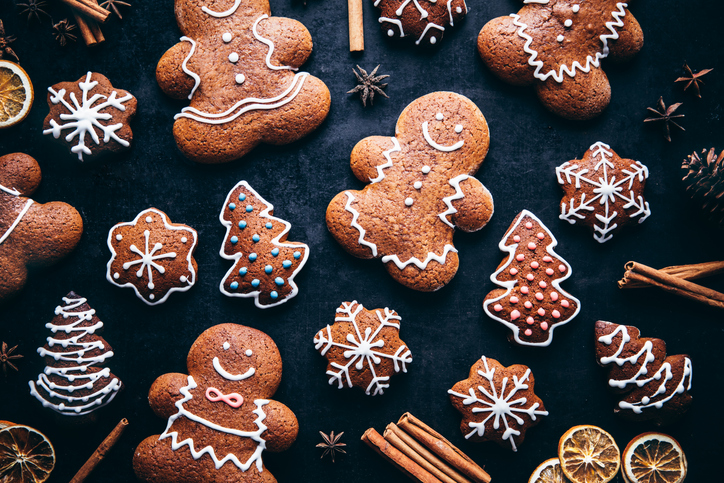 When the Grimm brothers collected volumes of German fairy tales, they found on about Hansel and Gretel, two children who, abandoned in the woods by destitute parents, discovered a house made of gingerbread and candies. “nibble, nibble like a mouse,” cackled the witch. “Who’s that nibbling on my house?”

In medieval England, if a fair honored a town’s patron saint, the saint’s image might be stamped into the gingerbread. If the fair was on a special market day, the cakes would be decorated with icing to look like men, animals, valentine hearts or flowers. Sometimes the dough was simply cut into round “snaps.” (Gingersnaps)
One English tradition was that unmarried women had to eat gingerbread “husbands” at the fair if they wanted to meet a real husband.

In the 1700s and 1800s, autumn fairs in Germany sold gingerbread hearts, decorated with white and colored icing and tied with ribbons. In the city of Nuremberg, gingerbread was not baked in the home but was made exclusively by a guild of master bakers. Nuremberg became known as the “gingerbread capital” of the world, and many gingerbread craftsmen were attracted to the town. Sculptors, painters, woodcarvers, and goldsmiths all contributed to the most beautiful gingerbread cakes in Europe. They carved wooden molds and decorated the gingerbread with frosting or gold paint. Intricate hearts, angels, and wreaths were sold at fairs, carnivals, and markets.

Gingerbread came to North America from all parts of northern Europe with the settlers who brought with them the traditions of their families.